Solar cells convert 3/4 of the solar spectrum into electrical energy, where the infrared spectrum is completely lost in standard solar cells. In contrast, black silicon solar cells are specifically designed to absorb this portion of the spectrum, and researchers have recently succeeded in doubling their overall efficiency. 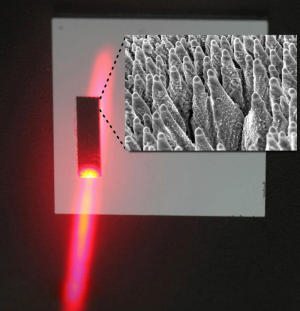 Solar energy shines from a deep blue sky, and then rooftop solar cells convert solar energy into electricity. However, not all light is converted to electrical energy, and about one-fourth of the solar spectrum consists of infrared radiation. This part of the light cannot be converted into electrical energy by standard solar cells, so this part of thermal radiation is lost. One way to solve this problem is to use black silicon, which absorbs almost all sunlight, including infrared radiation, that hits it and converts it to electrical energy. But how is this material produced? "Black silicon is produced in a sulphur-containing atmosphere by irradiation of standard silicon using femtosecond laser pulses." Fraunhofer Heinrich Hertz Institute (HHI) - Fiber Optic Sensing Systems Project Team -- Dr Stefan Kontermann, head of the "energy conversion nanomaterials" research group explained. "The surface thus formed, and the integration of sulfur atoms into the silicon lattice, making the treated material appear black." If the manufacturer uses black silicon to make solar cells, then solar cells can use the full solar spectrum, which significantly improves Battery efficiency.

HHI researchers are now trying to double the number of black silicon solar cells. In other words, they have created batteries that can use infrared spectroscopy to produce more power. "We achieved this by modifying the shape of the laser pulses used to radiate silicon," said Kontermann. This led scientists to solve a key problem with black silicon: In normal silicon, infrared light does not have enough energy to excite electrons into conductive bands and convert them into electrical energy, but sulfur-containing black silicon forms an intermediate layer. . You can compare it to climbing a wall: The first time you failed, because the wall was too high, but the second time you succeeded, because you can use the middle layer to climb the wall in two steps. However, in the sulfur, this intermediate layer not only allows the electrons to climb the wall, it can also work in reverse, causing the electrons in the conductive band to jump through the intermediate layer to the back, which causes the electrical energy to be lost again. By modifying the laser pulses that drive sulfur atoms into the lattice of atoms, researchers can change the position of three atoms in the lattice and change their layer height, that is, their energy level. "We use laser pulses to change the amount of embedded sulfur in order to maximize the number of electrons that can be climbed while minimizing the number of electrons that can be returned," concludes Kontermann.

In the first phase of the project, scientists modified the laser pulses and investigated how the properties of black silicon were changed and the efficiency of black silicon solar cells. Now they are working on using different shapes of laser pulses and analyzing how the energy level of sulfur changes. In the future, they hope that an algorithmic system can automatically determine how laser pulses should be modified to achieve optimal efficiency. The "Customized Light Pulse" project is one of the winners of the "365 Places in the Land of Ideas" competition, which will be held on October 11, 2012 in Goslar.

Researchers have successfully built prototypes of black silicon solar cells. Next they are trying to combine batteries with commercial technologies. "We hope to combine the use of black silicon to increase the efficiency of commercial solar cells by one percentage point. The current commercialization efficiency is about 17%," said Kontermann. Their starting point is the standard commercial solar cell: experts simply remove the backplane and then merge the black silicon into a part of the cell, creating a tandem solar cell containing both normal and black silicon. Researchers are planning a by-product: selling laser systems, and manufacturers will be able to expand their existing solar cell production lines. Manufacturers will be able to produce their own black silicon and put it into standard batteries. (Compilation: Liu Lu)